Buddhism has been part of Cambodian life for almost a thousand years. Buddhism originated inNepal and northern India and stemmed from the teaching of Siddhartha Gautama, the Indian prince and ‘first’ Buddha who achieved enlightenment around the late 6th century B.C. By the early 5th century B.C. the Buddha has passed his knowledge to a growing number of disciples and the faith spread rapidly through South-east Asia. The two great faiths of Buddhism and Hinduism dominated Cambodian religious life for centuries and the ancient Khmer alternated between these faiths depending on the religious beliefs of the reigning monarch. 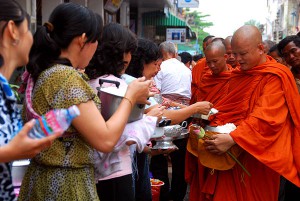 Mahayana Buddhism: Buddhism’s broad geographic scope led to differing interpretations of the faith. Initially Cambodian Buddhists practiced Mahayana Buddhism, a form of Buddhism that maintains other individuals besides the Buddha are capable to the achieving enlightenment. It also led to the acceptance of certain texts that other forms of Buddhism do not recognise as the word of the Buddha. The principal focus of Mahayana Buddhism is on achieving perfected states of understanding and compassion in order to lead others to enlightenment.

Theravada Buddhism (Teaching of Elders): Around the 13th century A.D. Cambodiaconverted to a more conservative form of Buddhism known as Theravada. Theravada Buddhism adheres closely to the teachings (dharmas) prescribed by Siddhartha Gautama and places great emphasis on monasticism and meditation. It recognises different paths to enlightenment but maintains that the Buddha’s dharm as must be central to a follower’s spiritual development. Theravada Buddhism remains the dominant faith in Cambodia. 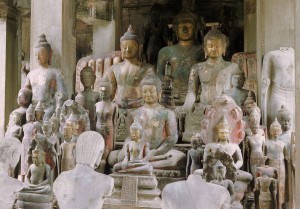 The Khmer language is part of the Mon-Khmer family and has its origins in Sanskrit and Pali. It is spoken all over the country except in some tribal areas where local indigenous languages are used. In larger towns and cities English is spoken by an increasing number of educated people. French is spoken by some of the older members of society and Chinese by many of the business people. All facilities catering to tourists employ English-speaking staffs who more often than not speak several other local and international languages including German, Thai, Vietnamese, Japanese and even Russian.

Maha Songkran
Maha Songkran, derived from Sanskrit Maha Sankranti, is the name of the first day of the new year celebration. It is the ending of the year and the beginning of a new one. People dress up and light candles and burn incense sticks at shrines. The members of each family pay homage to offer thanks for the Buddha’s teachings by bowing, kneeling and prostrating themselves three times before his image. For good luck people wash their face with holy water in the morning, their chests at noon, and their feet in the evening before they go to bed.

Wanabat is the name of the second day of the new year celebration. People contribute charity to the less fortunate, help the poor, servants, homeless people, and low-income families. Families attend a dedication ceremony to their ancestors at the monastery.

Tngay Leang Saka is the name of the third day of the new year celebration. Buddhist cleanse the Buddha statues and elders with perfumed water. Bathing the Buddha images is the symbol that water will be needed for all kinds of plants and lives. It is also thought to be a kind deed that will bring longevity, good luck, happiness and prosperity in life. By bathing their grandparents and parents, children can obtain from them best wishes and good advice for the future.

In temples, people erect a sand hillock on temple grounds. They mound up a big pointed hill of sand or dome in the center which represents sakyamuni satya, the stupa at Tavatimsa, where the Buddha’s hair and diadem are buried. The big stupa is surrounded by four small ones, which represent the stupas of the Buddha’s favorite disciples which are Sariputta, Moggallana, Ananda, and Maha Kassapa. There is another tradition, that is pouring water or plaster on someone.

Khmer New Year is a time to prepare special dishes. One of these is kralan, a cake made from steamed rice mixed with beans or peas, grated coconut and coconut milk. The mixture is stuffed inside a bamboo stick and slowly roasted.

Cambodia is home to a variety of games played to transform the dullest days into a memorable occasion. Through-out the Khmer New Year, street corners often are crowded with friends and families enjoying a break from routine, filling their free time dancing and play. Typically Khmer games help maintain one’s mental and physical dexterity. The body’s blood pressure, muscle system and brain all are challenged and strengthened in the name of fun.

A game played by throwing and catching a ball with one hand while trying to catch an increasing number of sticks with the other hand. Usually, pens or chopsticks are used as the sticks to be caught. 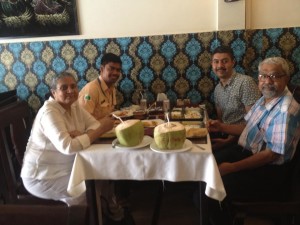 You can’t go wrong with Nicky! 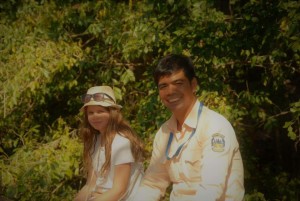 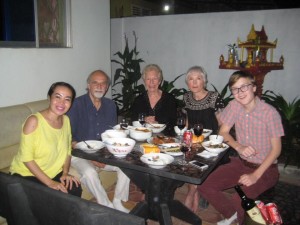 An excellent guide for the whole region
I am s… 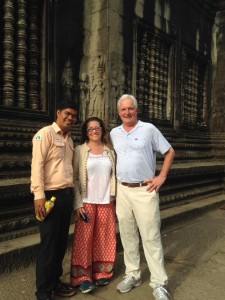 My family visited Siam Reap, and Nicky was our t… 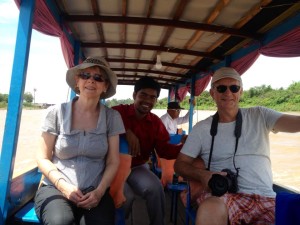 Perfect Tour Guide for Siem Reap I am still n…